Tonight I learned that our inspiration at InSTEDD, Dr. Larry Brilliant, is stepping down from his position as Executive Director of Google.org.

From InSTEDD’s perspective there is quite a bit of history in that event. Larry’s TED Prize led to the formation 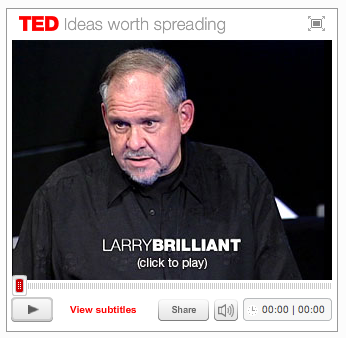 of this organization, including our odd name (an inside joke during the TED acceptance speech), and our admirable charter to use technology to improve detection of, and response to, crises. He hired me as CEO in 2007 and, for the past 18 months that I’ve known Larry, he’s been one of the most kind, intelligent, intense, and creative men I’ve ever had the pleasure to know. I’ll miss his voice at the helm of Dot-Org.

It’s valuable to remember that Larry’s TED Wish, for “Better Early Detection, Better Early Response” against emerging infections and natural disasters, has sparked ideas all over the globe, including the suite of capabilities we’ve introduced here at InSTEDD.

Larry encouraged us to look very closely at the problems he was worried about. He had spent years in India and knew well that nothing much could be designed to help villagers report diseases unless someone with a technical background went out to LIVE there, helping them understand the art of the possible while immersed with them in the reality of the day. Naturally enough, ideas for other people work best when designed with those people. We need to fit our suggestions into their needs, their culture, their workflow, and their desires. Users need to own the process, the design, and the result. He has never let us forget that and his concern has paid off handsomely.

He recognized that, to be effective, we needed to share the problems of unreliable power, dangerous insects, dirty water, leftover landmines, cross-cultural suspicion, illiteracy, cold, heat, and all the rest. But he also knew we’d find in those villages courage, and intelligence, and discipline, and sacrifice, and a passionate desire to do the best possible job, even when resources are maddeningly scarce and lives are lost for truly stupid reasons. A small scratch becomes an abscess. A mosquito bite carries Yellow Fever. No gasoline for the ambulance. Tires buried in mud. No aspirin. No chlorine. No clean gloves. No toilet. No soap. A thousand little events no longer seen in the modern world but that can make a trivial problem fatal where we work.

At InSTEDD, being true to Larry’s TED Prize Wish, we’ve worked hard on determining just how Larry’s “Better Early Detection, Better Early Response” could be achieved. As we researched the problem in Geneva with the World Health Organization, in Atlanta with the Centers for Disease Control, in Cambodia, Bangladesh, Ghana, Peru and elsewhere, we found one constant, ubiquitous, and overwhelming problem: Collaboration. People with information couldn’t share it with those who needed to know. Either it was too hard to report that sneezing chicken, or some system couldn’t read that file type, or the message was buried invisibly in the morass of other things people had to read and was lost before a team of experts could think about it.

We looked around carefully and saw that plenty of people were doing open-media analysis. We saw that many others were doing cellphone-based communication. We recognized that we needed to stitch it all together and make sense out of it all. We needed to link community health workers to everyone that needed to see their information. We needed to translate that information between all of the systems where experts were trying to keep track and couldn’t. We needed to help those experts get together to think about that one small “something” that didn’t look right. 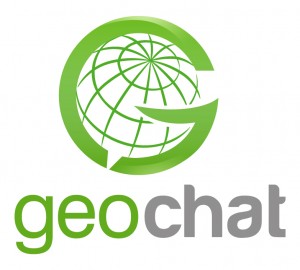 And that’s what we’ve done. GeoChat, Mesh4x, and Riff are in beta and in use in useful corners of the world. We now have health workers talking amongst each other in Mongolia and in Cambodia and in Ghana. We have world-renowned epidemiology software for the first time able to pool information from different locations by forming a “mesh”, measurably improving the statistical power of the analysis. That mesh synchronization is working for HIV Clinics in Africa as well. We have global monitoring offices in world capitals using our analytical techniques to watch information pouring in, spot anomalies, and notify the real humans that something’s wrong, while automatically generating a set of ideas about what the problem might be. It’s really good stuff.

We’ve also developed a work plan and a curriculum to teach what we know. We’ve made sure anyone working with us can take full ownership of our tools by making them free and open source, and by carefully training our users in software languages and techniques so that they can alter the tools whenever they like to meet their changing needs. We’ve noted, happily, that we’re slowly reversing brain drains and beginning to build little Brain Trusts. 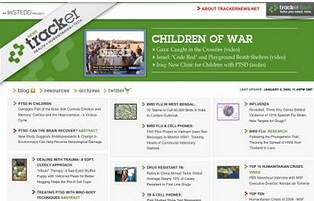 We’ve also discovered how much useful science and technology is invisible to the humanitarian community and started a website to make those links more visible. The site is at www.TrackerNews.net, and even NPR has taken note of how valuable the site is becoming.

And from work stimulated by Larry Brilliant’s original TED Wish, our conference poster describing our new tools for analysis won First Place in the global competition at the International Society for Infectious Diseases last December. It’s a nice achievement.

So, with much gratitude to Larry, we’re taking the spirit of his TED Wish, his intelligence, and his humanity, mixing in a few genius engineers of our own, and adding a staff deeply committed to science, common sense, and social justice to make “Better Early Detection, Better Early Response” a reality.

Thank you, Larry. Your vision has shaped our work. We’re quiet, of course, (like all good public health and disaster preparedness efforts), but it’s going very well, we’re very grateful to you, and the world is again a little better off through your efforts.