When is the earthquake going to end? is what the phrase above means in Kreyol, and it is one of the messages our team in Haiti received today. It is a stark reminder of how much suffering people are experiencing in Haiti right now. 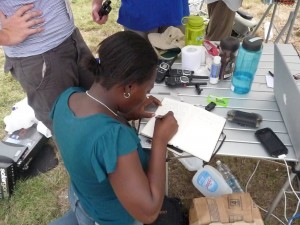 How is technology aiding in the relief efforts? How is the Emergency Information Service I described yesterday working on the ground? As of earlier today, over 700 people had subscribed to the service, and EIS was able to send out several alerts to the community about where to get medical care and help. Translated messages can be viewed at Ushahidi’s Haiti site.

Here is one example of how technology helped our teams from the United States and Haiti coordinate relief across the ocean using EIS and other tools in near real time. It started when one of our US-based Haitian-American translators alerted us to an email she received from a Haitian USENET group Corbetre of a hospital available to receive patients. She told me about it over skype, and I alerted our team in Haiti over a skype chat (which they were accessing through an Inmarsat BGAN satellite). Reuters confirmed the hospital did indeed have room, after which another one of our US-based translators turned the report into 140 Kreyol characters, sent it over skype back to Haiti, where it went out over the EIS System to the 700 subscribers. All of this happened within 10 minutes of us learning about the hospital.

I wish I could say that, because of what we did, lives were immediately saved. Unfortunately, reality is not that straightforward. It turns out that the hospital is a 5 hour drive from Port au Prince and the road is so treacherous it requires helicopters to transport patients there (so we also contacted the U.S. military helicopter coordinators). Technology is but one critical piece of a much larger aid effort. Let us hope we can soon answer our Haitian friend’s text “when will it end?” with now.