In 2018 Vietnam’s population is adopting digital technology at lightning speed due to a few compelling factors.

Internet access and availability is high compared to other neighbouring countries such as Laos (15.7%), Cambodia (11.1%), and even Thailand, a country with a GDP twice that of Vietnam.

With a fully-formed commercial sector for digital services in Vietnam, public services are also going digital.

Paper-based processes are being replaced by digital forms. For example, instead of filling out a paper form to apply for a birth certificate or driver’s license, Vietnamese citizens can now submit these applications using the internet.

As recently as five years ago this wasn’t the case, and in many Western countries, it is still not being done. Adopting this digital format saves lots of time and money for both the public and the government.

In the healthcare sector, the Ministry of Health of Vietnam already has a surveillance system on infectious diseases online, as well as an immunization records system. This year an online surveillance system for non-communicable diseases will be launched. Many Vietnamese hospitals have even installed their own digital systems to manage a database of their patients.

A very bright future for digital health information seems to be blooming in Vietnam.

However, despite the availability of cutting-edge digital tools, hospitals and healthcare centers continue to use conventional paper-based information management, especially at the local level.

District and national level public health decision-makers need accurate data to be able to assess the risk of a situation, especially in high-stakes emergency health situations. Currently it can be difficult to make calculated decisions using paper-based data.

The slow adoption of digital tools by most hospitals and health centres may be attributed to obstacles like infrastructure, internet connection, protocols and human capacity.

Despite the modern facilities and advantages of technological development, human personnel play a core role in the transformation from a paper to digital system.

While the infrastructure and internet connection have been gradually improved, human capacity is the one variable which can be a challenge, especially when workers are used to old habits

As a facilitator in a few training courses on applying digital systems for local healthcare workers from junior to senior level, from young millennials to the older generation, I found that they were all hard-working, trying to learn a new system and not hesitating to ask for support. 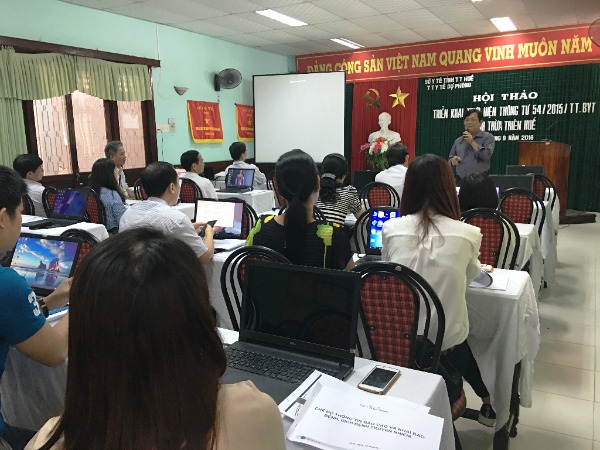 A training course for local healthcare workers on using digital systems in Vietnam,

Surprisingly, the problem was recognized that those trained staff were often transferred to other positions and the newcomers could not run the system well due to a lack of training.

Other doctors complained about their overload situation as they had to simultaneously serve dozens of patients and input the information into the system at their workplace.

Some of the more experienced senior staff admitted that although the advantages of the digital system compared to the paper-based model were plentiful, they still believed that they were too old to learn something new.

Billions of dollars have been invested into building modern and updated systems, but humans run those systems. Without trained personnel, a system fails to work, no matter how expensive or technologically advanced.

With awareness of this critical human element, here are a few ways that Vietnam, and any public health system, can improve the implementation of new digital systems.

Additionally, public health leaders must issue policies to support a digital health information system and incentives should be applied to individual health centers with set adoption rate goals for the near future.

With the right mix of policy and practice, all public health stakeholders can benefit from the promises of digital technology.